Asia is a huge place…in fact, it is the largest continent on Earth, stretching thousands of miles and featuring every kind of landscape you can imagine. The world’s tallest mountains (the Himalayas) can be found in Asia as can the dry Gobi Desert, the frozen Arctic tundra of Siberia and the tropical rainforests of Indonesia. Asia also has two of the longest rivers in the world, the Yangtze and the Ganges.

The people of Asia are as diverse as its landscape…and there are a lot of people in Asia. The two countries with the largest population in the world, India and China, are located in Asia and more than half of all people on Earth call it home. Thousands of different languages are spoken in Asia, including three of the most widely used (Arabic, Hindi and Chinese). The world’s major religions, Buddhism, Christianity, Hinduism, Islam and Judaism, all began in Asia.

In Asia you can find very modern cities, such as Tokyo and Hong Kong, with tall skyscrapers, fast trains and busy highways. But, if you travel to other parts of Asia, you can find people who live a very traditional way of life that hasn’t changed much for thousands of years.

The food in Asia ranges from the spicy curries of India to the elegant sushi of Japan. You have probably tried Chinese food before, but there are lots of different regional variations of Chinese food and every country in Asia has its own special types of food. Cinnamon, ginger and many other spices used by people all over the world come from Asia.

Asia’s diversity can be seen in its art, dance, handicrafts and other creative expressions. From the shadow puppets of Indonesia to the
delicate pottery of Japan, the massive stone sculptures of India to Chinese opera, there is so much to discover and enjoy in Asia.

Asian music is also filled with surprises. Each country has its own local styles, with unique musical instruments, rhythms, melodies and dances that go with them. As you will hear on these songs, Asian music can be traditional or can include influences from around the world, especially Western popular music, jazz, reggae and more. And, because Asia has so many countries and musical styles, we are only able to “scratch the surface” with this album. We hope you enjoy this musical journey and it inspires you to learn more about the fascinating continent of Asia.

Only 2 left in stock

Delivery is available to addresses within the city limits of McMinnville, Amity, Carlton, Dayton, Lafayette and Yamhill. More information. 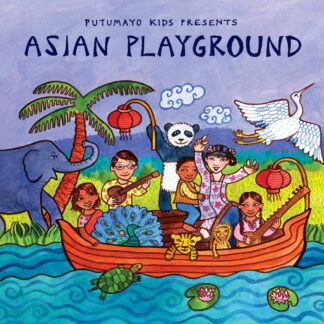